We have a friend who’s a folk artist. A few years back he carved and painted two small refrigerator magnets that have become prized decorations in our kitchen. One is the Planters mascot, Mister Peanut; the other is the Pillsbury Doughboy, Poppin’ Fresh. Both are well made and absolutely nail the characters.

Our friend also likes to cook — Southern-style! Once, he said that whenever he boiled potatoes for mashing, he’d drain off the water and save it. The “broth” contained a lot of the starch from the spuds, as well as the potato flavor that’s currently popular in breads. He’d use this liquid instead of plain water whenever he made biscuits. The biscuits held together better and had a richer flavor!

It’s similar to what we do when boiling chicken for certain dishes: we save the “stock” and use it to flavor soups, casseroles, and our favorite chicken and rice dish. Guests often ask what gives the rice such a savory flavor. We always give the short, direct answer. But the longer, indirect answer is that we don’t waste anything; what many people decant, cut away, and cast out — assuming it to be worthless — is always put to good use in our kitchen. Even fruit and vegetable peelings can be composted.

Another item we save and “repurpose” is stale bread. We use it to make stuffing and bread pudding. Why waste a good thing, even if it appears to be “bad” — just like the cloudy liquid left over from boiled potatoes. In the kitchen, EVERYTHING that’s seemingly of no value, seemingly a “lost cause” or a “complete waste” can serve a good purpose. Savvy cooks never waste. And neither does God.

The savviest “cook” in the kitchen of life is our Heavenly Father, and He never wastes anything. He simply repurposes it for His use. That means the fallout from a failed relationship or business venture will be put to good use in our lives. God may use a painful or embarrassing experience to teach us a truth, help us develop better character, or get us ready for a bigger challenge. Sometimes, He simply wants to get us on the right track again, so that he can fulfill our special destiny.

He uses defeat to make us stronger. He repurposes grief to make us compassionate. He allows closed doors and missed “opportunities” to keep us out of trouble. He doesn’t waste anything.

Whatever we’ve suffered, whatever we’re going through, whatever mistakes we’ve made, God always finds a good use for these “bad” experiences — which seem at the time like “lost causes”; like a “complete waste”! But in God’s kitchen there’s no waste. Every tear you’ve shed, every heartache you’ve endured, every moment of sorrow and suffering, doubt and despair — He’s restructured into something new and more wonderful. We usually don’t know what God is cooking up. Nor can we often see how He’ll repurpose something wrong and destructive into something right and renewed. But His Word explains to us that He continually does so. We can trust Him that our losses, our failures, our sorrows are never wasted. He is truly the God who renews, repurposes, restructures and reuses all we have and have gone through — the good, the bad, and the ugly. 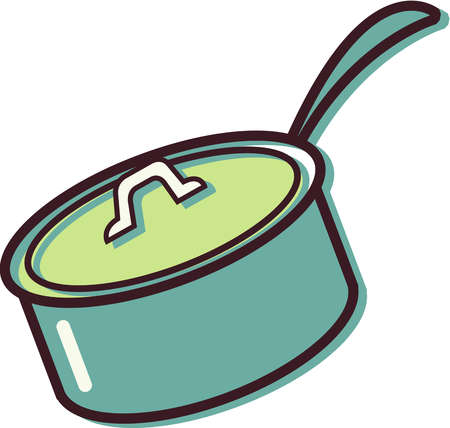 “…You meant evil against me, but God meant it for good in order to bring about this present result….” (Genesis 50:20 NASB)

“And we know that God causes everything to work together for the good of those who love God and are called according to His purpose for them.” (Romans 8:28 NLT)

We don’t often fry foods; frying can be messy, and fried foods aren’t very healthy. Once in a while, though, we do fry thin-cut, lean pork chops. We set the gas at medium to control the heat and put a lid on the skillet to minimize the spatter of the sizzling olive oil. We recently discussed putting a lid on pots to prevent thin 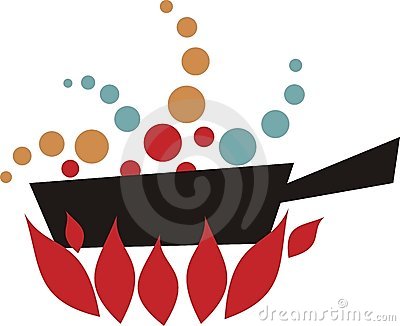 gs from boiling over, and we compared the precaution to “setting a guard” over our mouths, lest we blurt out stupid and hurtful words. Keeping a lid on things is the best way to avoid having to clean up a mess, whether it’s on top of the gas range or in a relationship.

It’s impossible, however, to keep a lid on the skillet throughout the entire frying process. You have to remove the lid to turn the chops (or whatever you’re frying), and when  you do, droplets of flesh-searing oil take the opportunity to spatter your hands and the top of the range. And —  wouldn’t you know it? — those red-hot spatters of grease are just like words! Sooner or later, no matter how careful we are, we’re going to say something stupid or hurtful. We’re all sensitive about something, and some of us may be overly sensitive; so when we consider the human propensity for “Foot-in-Mouth” disease, we realize that when interacting with others, eventually someone is bound to get burned by a sizzling word.

When frying food, we expect to have a few oil spatters, so we keep a sponge with a little ammonia nearby. When the skillet spats at us, we wipe away the grease right then and there. Cleaning things up fast is always best, because these spatters can be nasty and things can get sticky, just like harsh words in a relationship if not quickly dealt with. But what substitutes for ammonia when cleaning up the messes we make with our mouths? Something much stronger than ammonia, something that removes even the toughest stains. No, not Tide! LOVE!♥♥♥

If you’ve read a few of these posts, you’ll realize we love old movies (and a few new ones, too), but movies, even the ones that seem realistic, are glamorized depictions of life. Hollywood tends to varnish life so it shines brighter. (As though life weren’t already bright enough — but then, that’s why Hollywood is called Tinsel Town.) It also espouses its own crazy philosophy. You can enjoy the show, without buying into everything Hollywood presents as “wisdom”! The 1970 tearjerker Love Story is a great example: “Love means never having to say you’re sorry.” That might look good on a cheap t-shirt, but if you practice this philosophy you’ll never have a “love story” — or any meaningful relationships!

TRUE love is quick to say “I’m sorry” — wherever and whenever your words offend. And as often as your words offend! In fact, TRUE love means actually getting into the habit of saying, “I’m sorry I hurt you again. I was wrong. Please forgive me.” Here’s the two-step cleaning process: first, apologize to God. “If we confess our sins, He is faithful and just to forgive us our sins and to cleanse us from all unrighteousness.” (1 John 1:9 KJV)

Second, “Confess your faults one to another, and pray one for another, that you may be healed.” (James 5:16 AKJ)

Making a habit of apologizing requires us to get rid of stinking pride. It’s humbling to admit when we’re wrong, but it’s always necessary. And it takes God’s grace, the supernatural strength to do what’s right in a difficult situation. So take responsibility for your words and actions. Don’t try to shift the blame. Don’t make excuses for bad behavior. Say the magic words: “I’m sorry.” Say it like you mean it, and say it quickly, before the mess gets out of hand. Don’t walk out the door or go to bed without making things right. Hurts build up and harden, like spattered grease on the rangetop. It’s easier to clean it immediately than to wait for another time. Apologizing only gets harder the longer you wait.