Triangles can often spell trouble! Legend has it there’s an area in the western part of the North Atlantic Ocean where numerous ships and planes have mysteriously disappeared. This loosely defined area has been called the Bermuda Triangle, or — The Devil’s Triangle! Now, we’re not exactly sold on the idea that of all the various shapes, the triangle is the most insidious; but its particular geometry has a history of vexing people. Egypt’s great pyramids may have been a place of rest for the Pharaohs of Old, but not for the slaves who labored to construct these imposing stone monuments. And what did the average “underpaid” laborer working on King Tut’s tomb behold? The four triangular faces of the pyramid!

Sinister, right? And in school, when he wasn’t throwing spitballs, the worst kid in band class got to play the … triangle! Perhaps there’s good reason the triangle belongs to a type of musical instruments labeled idiophone! (Funny? Hey, this is the kind of stuff that’s just too crazy to be made up!)

And in life, love, and relationships, triangles always cause emotional pain, and usually end in disaster.

The shape of a triangle has 3 sides and three points. A triangle relationship involves 3 people and has 3 sides (to the story). In a marriage, an emotional triangle can lead to spiritual and/or physical adultery — requiring a fourth person to get involved, one with a law degree! Please don’t go there. Adulterous triangles are hard to square with God and spouses. (Pun intended.) If you’re dating, then you know triangles can be just as aggravating outside a marriage. It’s hard to have a meaningful relationship with a friend (or parent, or brother, or sister, or even a family pet) whose attentions and loyalties are divided. People are, after all, naturally selfish, self-centered and possessive. So, having a third party present, especially one who’s competing for attention (and even affection) can be aggravating.

Johnny Mathis recorded a popular song about the woes of a triangle in dating. “I seem to be the victim of a cruel jest,” he crooned. “It dogs my footsteps with the girl I love the best. She’s just the sweetest thing that I have ever known; But still we never get the chance to be alone. My car will meet her — And her mother comes too! It’s a two-seater — Still her mother comes too!”

We don’t believe Mathis was singling out moms, because he includes a verse about sulking at his club — only to have his girl friend’s brother tag along! “There may be times when couples need a chaperone; But mothers ought to learn to leave a chap alone. I wish they’d have a heart and use their common sense; For three’s a crowd, and more — it’s triple the expense!”

There are situations, however, in which three is NOT a crowd, and the poor, teary-eyed triangle gets an opportunity to redeem his much-maligned geometry. The first is in the kitchen. (See? We may fly off on a tangent, but we always find our way back to the heart of the home!)

Designers and architects frequently express the need to arrange the cook top, the sink, and the refrigerator into a shape that ensures each is only a few steps from the others. The primary tasks involved in preparing a meal are carried out between these three “kitchen angels,” and reducing the distance between them reduces the time and energy spent cooking. The three workhorses of the kitchen should form a triangle; and according to designers, the imaginary lines between the sink, range, and refrigerator should be no more than 9 feet.

This idea seems new, but it actually goes back to the 1940s. Efficiency experts dubbed it the “kitchen work triangle,” correctly stating that food storage (from the refrigerator), preparation (at the sink) and cooking (on
the range) are easier and less tiring when these three elements are closely gathered in a triangular formation. 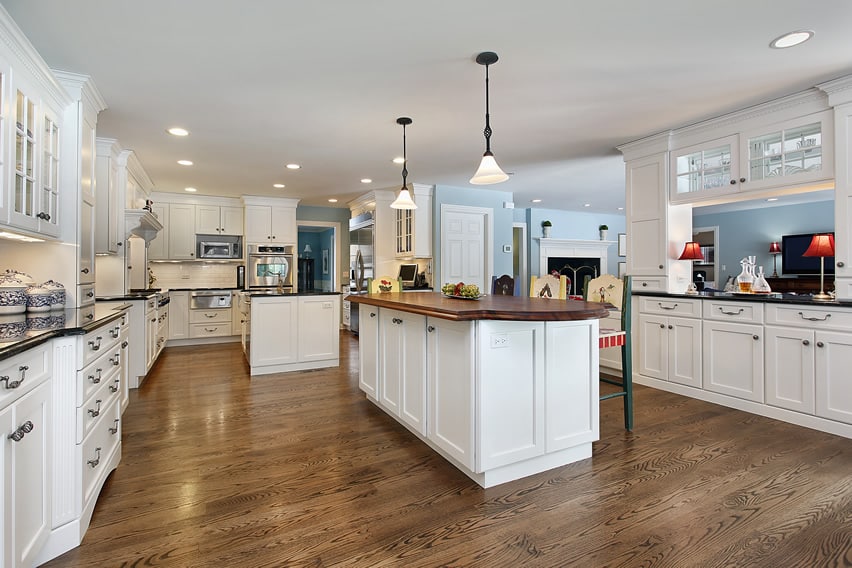 We’ve visited some homes with cavernous kitchens, in which the cook needed roller skates to get from the range to the sink to the fridge! The acoustics in these oversized kitchens are great — the beeping of the microwave produces a pleasing echo as the sound bounces from wall to far wall — but cooking a meal in such a space can be exhausting! The kitchen work triangle creates an efficient and well-ordered arrangement that facilitates life in the heart of the home.

When you commit to being one of the parts of the spiritual triangle, your life will be well-ordered and your activities will seem less tiring. Your life will become more efficient, so to speak; spiritually efficient, because including God in your plans will facilitate all you do. But it’s not enough to simply include God in your geometric pattern for living; like the kitchen work triangle, the spiritual triangle operates at peak efficiency when the three parts are close together.

Being closer to God, more deeply connected, helps maintain the primary tasks of the heart (life, love, and relationships). His infinite love, His wisdom, and His guidance all work together to ease the everyday struggles of life. Furthermore, in relationships, His presence strengthens the bonds between people, and keeps clean-ups to a minimum. When we have a good relationship with God, we’re better equipped to handle relationships with others. God and other people, the two are closely tied together: “Jesus said, Love the Lord your God with all your passion and prayer and intelligence. This is the most important, the first on any list. But there is a second to set alongside it: Love others as well as you love yourself. These two commands are pegs; everything in God’s Law … hangs from them.” (Matthew 22:37-40 MSG)

The third peg in the spiritual triangle can be YOU — if you’re willing to surrender to God (by letting Him call all the shots), and draw closer to Him through worship, prayer, and Bible study. So, next time you’re in the kitchen, look for the work triangle. Let it remind you of God’s love for you, and His divine wisdom and power, which can abundantly facilitate all you do. God’s spiritual triangle will always make life easier, and you can always trust Him to keep you anchored in your corner.

“Two people are better off than one, for they can help each other succeed. …[But] three are even better, for a triple-braided cord is not easily broken.” (Ecclesiastes 4:9, 12 NLT)