Concerning fruitcakes, apparently more people enjoy baking them than eating them. Why else do fruitcakes constantly show up beneath the Christmas tree or in a game of White Elephant? Because at least one cook in every family bakes several each year with the good intentions of distributing them as gifts. In fact, fruitcakes are to Christmas what toasters are to weddings.

So, as we sip eggnog with friends and family by the fireside, someone will inevitably pass us a suspicious looking loaf-shaped parcel tied up with a bow. With a little trepidation, we slowly unwrap our gift. Is it another necktie? Socks? A high-def TV? No, it’s a dense hunk of nuts and gummy fruits barely held together by a pinch of flour and a hasty prayer! Ho Ho Ho-oooh! 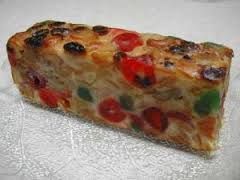 And now it begins: the annual fruitcake shuffle! We pass it off to you, you pawn it off on your boss, your boss re-gifts it to his sister, she takes it to her pastor, he delivers it to a board member who’s been a pain in his neck, the pain-in-the-neck gives it to his neighbor who babysits for him when she’s actually got better things to do — and who deserves something much nicer for the time she’s spent — and she … uh, just happens to know us!

This poor, overtaxed servant brings it right back to us: “Hi, I couldn’t get out and do any shopping — ‘cuz I’ve been babysitting a lot of nights — but look, I brought you guys a fruitcake!!”

“Oh, yummy!” we cry in unison, giving her a hug. “You really really shouldn’t have!!” Once our guest departs, one of us asks, “Sweetie, isn’t this the same fruitcake we got rid of a few days ago?”

“Could be,” the reply comes. “Then again, you never know: after all, all fruitcakes look alike to me.”

“I hope it’s not the same one we gave away last year! Ya know, some of these things would benefit from carbon-dating. So what should we do?”

“Don’t we still need to give your brother a gift?”

For a long awkward moment we stare at each other in silence. How could we stoop so low? We should be ashamed of ourselves! We should be….

Before we continue with this confessional, we’d like to ask a nagging question: Does anyone ever buy a fruitcake? Probably not. Because everyone knows that someone somewhere has one they’re trying to give away! Actually, legend has it that there are only a finite number of fruitcakes still in existence, all of them baked centuries ago by trolls living under a bridge. These dried out blocks of fruit and nuts just stay in circulation … making the rounds … the quintessential objects of re-gifting … forever … and ever … Hallelujah … Hallelujah! *Sigh!*

There’s a scientific theory that should anyone — let’s say, someone who’s delirious from hunger — ever actually eat one, it would drastically decrease the surplus population of fruitcakes, ushering in the end of civilization as we know it! But not to worry, Christmas is just around the corner! And fruitcakes are the gift that keeps on giving! Year after year after year!

There’s another gift that keeps on giving — but not because anyone re-gifts it. In fact, no one who’s ever received this gift has ever wanted to part with it — it’s that precious! No one can make it, and no one can buy it. It can’t be earned and it can’t be given away. It’s the free gift of eternal life, bestowed by our Heavenly Father, through His Son Jesus Christ! “The payment for sin is death, but the gift that God freely gives is everlasting life found in Christ Jesus our Lord.” (Romans 6:23 GOD’S WORD)

Christmas commemorates the day Jesus Christ came to earth in human-form; the birth of our Savior in a Bethlehem manger over 2000 years ago. It’s a time of giving gifts, because the arrival of Christ on earth led to His giving the greatest gift mankind has ever known — or ever will! Christ gave His life for each of us. “Thanks be to God for his indescribable gift!” (2 Corinthians 9:15 NIV)

Have you opened God’s gift yet? Trust us, that’s no fruitcake — or anything else you’d want to give away. Indeed, it’s a treasure that keeps on giving throughout eternity! “If you declare with your mouth, “Jesus is Lord,” and believe in your heart that God raised Him from the dead, you will be saved.” (Romans 10:9 NIV)

“God saved you by His grace when you believed. And you can’t take credit for this. It is a gift from God.” (Ephesians 2:8 NLT)