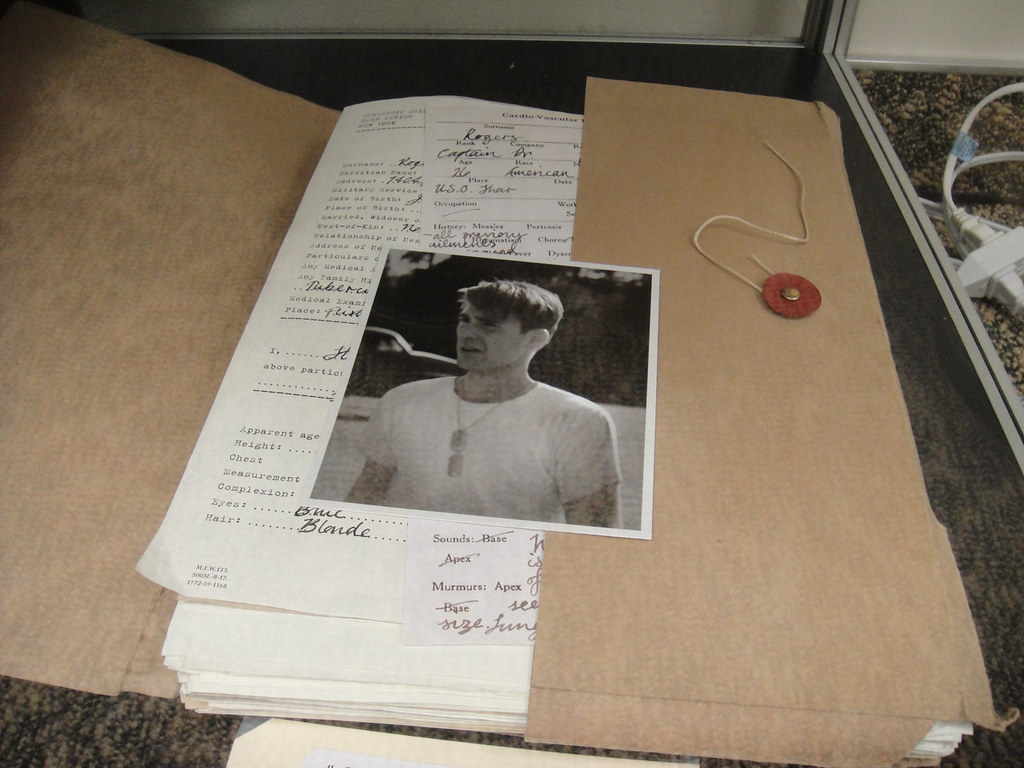 Previously: The 2011 movie Captain America, the First Avenger offers viewers some valuable truths regarding dreams and determination. The hero, Steve Rogers, has a big dream — to do his patriotic duty by serving in the U.S. Army during WWII. Trouble is, Steve’s a sickly ninety-eight pound weakling who can’t pass the enlistment physical. No matter how many times he tries — each time falsifying his application by listing a different hometown — the verdict is always the same, a big fat “you don’t have what it takes to succeed” 4F stamped on his personal file.

Refusing to give up, Steve decides to try yet again, when he and his long-time friend Sgt. Bucky Barnes attend the 1943 World Exposition in New York. Bucky, who’s more like a brother to Steve, gets a little irritated. Instead of having fun at the fair, Steve’s still focused on his seemingly impossible dream of joining the army.

“What is it?” Bucky asks, in exasperation. “You got something to prove?”

Steve calmly responds, “What do you want me to do, collect scrap metal with my little wagon?” He then points out that there are countless guys overseas risking their lives in the fight against Nazi oppression, and he feels he can do no less. “It’s not about me!” 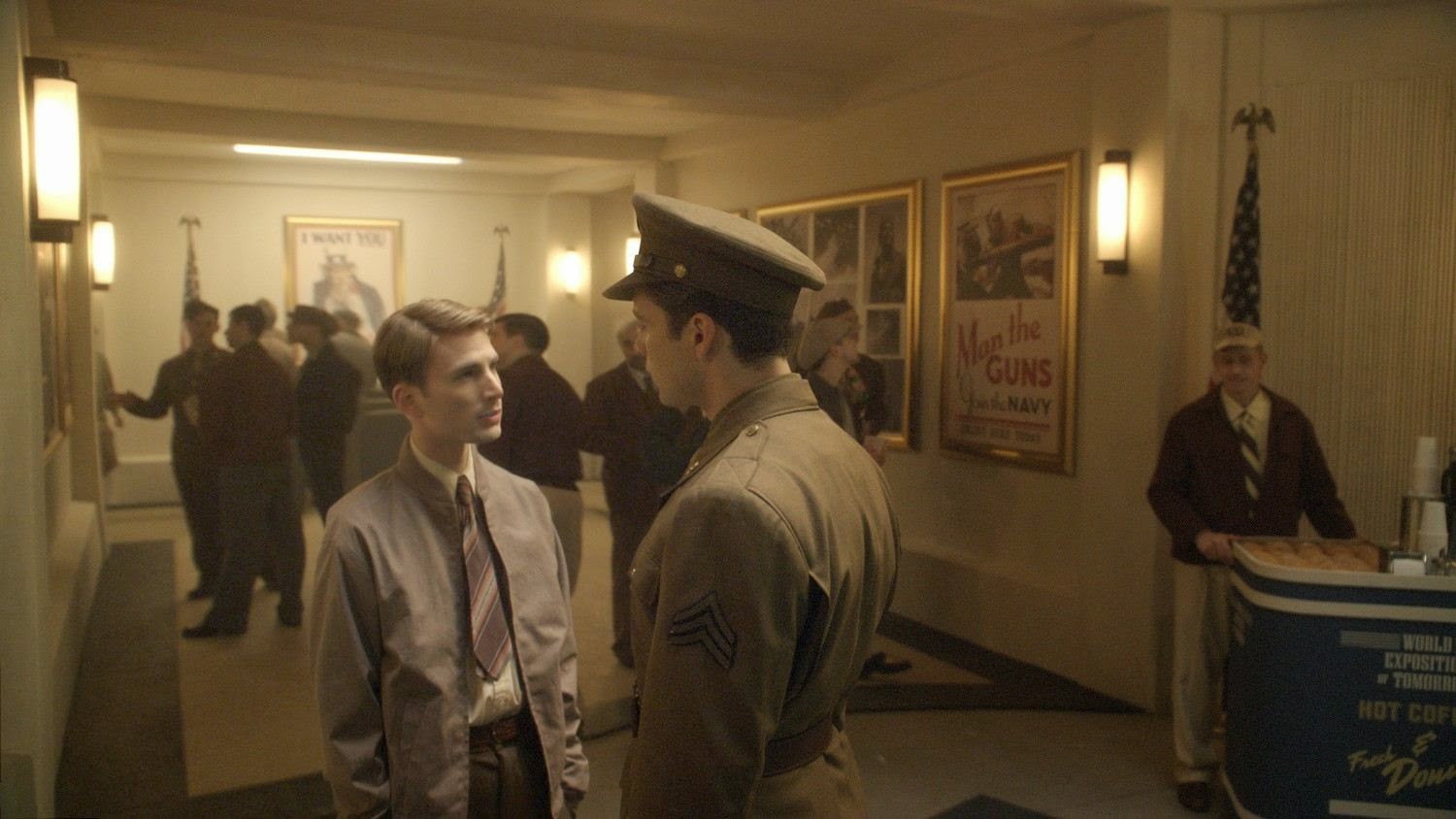 Bucky realizes his friend is right. He hugs Steve and they part company in peace. But unknown to these two men, an elderly gentleman has been listening to their conversation. His name is Dr. Abraham Erskine, an unassuming scientist who’s destined to play a big part in Steve’s life.

In the next scene, Steve is sitting on a cot in a makeshift examination room inside the Expedition’s Army Recruiting booth. He’s waiting for the doctor to return, when in walks an M.P. followed shortly afterward by Dr. Erskine.

Erskine has a file documenting Steve’s numerous failed attempts to enlist in various cities. As he flips through it, he asks, “Where are you from, Mr. Rogers? Is it New Haven? Or Paramus? Five exams in five different cities.” During this exchange, Steve is hastily dressing. He knows that falsification of an enlistment application is a serious offense.

But Erskine’s not at all interested in legalities. “It’s not the exams I’m interested in,” he says. “It’s the five tries.” He also remarks, “So, you want to go overseas. Kill some Nazis.”

Steve, who’s always been picked on because of his scrawny size, responds honestly: “I don’t want to kill anyone. I don’t like bullies. I don’t care where they’re from.”

“Well,” says Erskine, “there are already so many big men fighting this war. Maybe what we need now is a little guy. I can offer you a chance. Only a chance. …So where is the little guy from? Actually?”

Dr. Abraham Erskine is true to his word; in the next scene, Steve Rogers is once again  standing before an Army recruiter’s desk, with his file open before him. Within that file is a history of failure: five separate attempts, four previous verdicts of 4F — unfit to serve. But the response to his fifth try, to Steve’s delight, is success. He watches with relief — knowing that at last he’s realized his long-held dream of becoming a U.S. soldier, of getting an opportunity to do his part in the fight against evil tyranny — as his application is stamped 1A !

Spiritual lessons? Yes indeed, including a couple of points we’ll share in our next article. For now, we’ll examine four truths that apply to all us creators and dreamers — to everyone actually.

2. Because, one day, when you least expect it, you will have a “divine appointment” with someone who’s god-sent to help you realize your hopes and dreams; a facilitator, a collaborator, a connection; a true “Barnabas” (as Acts 9:26-31) who, like Dr. Erskine, will look beyond the surface to see your potential — and “offer you a chance”! Rest assured the time will come, because God “blesses the righteous man … [and] surrounds him with favor as with a shield.” (Psalm 5:12 NASB)

3. In God’s estimation we are all 1A ! There are no 4F washouts in His eyes. God created each of us “in His own image” (Genesis 1:26); and within each of us He sees tremendous potential. It’s God who put the dreams in our hearts, and it’s God who grants us the gifts and talents — the creativity — to pursue and realize those dreams. “A person’s gift makes room for him, and leads him before important people.” (Proverbs 18:16 NET)

4. Our loving Heavenly Father has great plans for us! (Jeremiah 29:11) In fact, God is committed to our success. He will help us realize our hopes and dreams, by sending a Barnabas, by opening doors, by making a way where there seems to be no way. (Isaiah 43:19) With God’s help, we WILL be victorious! We are fully “convinced and confident of this very thing, that He who has begun a good work in you will [continue to] perfect and complete it….” (Philippians 1:6 AMP)

When the Lord gives you a dream, a goal, an aspiration — it’s a “keeper”; God does NOT change His mind. To quote Romans 11:29, “For the gifts and the calling of God are irrevocable” (ESV) and “can never be withdrawn.” (NLT) It doesn’t matter if we make poor choices, if we fail, if we have to take a detour, or get delayed, or even grow weary and disillusioned along the way. God always has a plan to get us back on track, back on course, and back in the fight. We just need to trust Him and follow His leading, because He is “Faithful and True”! (Revelation 19:11)

“God is not like people. He tells no lies. He is not like humans. He doesn’t change his mind. When He says something, he does it. When He makes a promise, He keeps it. (Numbers 23:19 GW)