It never hurts to diversify. After all, why put all your eggs (or opportunities) into one basket? And if you’re a creator, that means devoting time and energy to both your day job and your creative hobbies and sidelines. Even when that hobby doesn’t seem to fit in with your “chosen” profession. Take William James Morrison (1860-1926) for instance. He was a dentist by trade. It’s hard to imagine he’d do anything that didn’t fit in with his day job. But you’d be surprised. 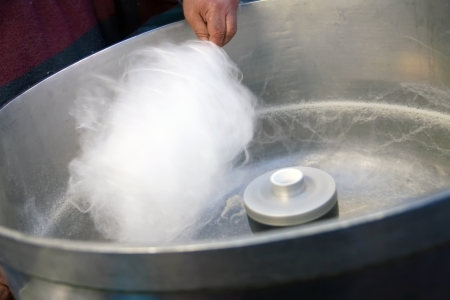 Morrison apparently wanted more out of life than filling cavities. He was an avid inventor, and owing to his creative nature, the good dentist held a number of patents in his name — for gadgets and gizmos you’d never expect from someone whose jurisdiction is teeth. Enough suspense. Morrison invented the first cotton candy machine! (But, now that we think about it, maybe Morrison was trying to grow his dental practice.)

The New York Times once wrote that cotton candy “is almost 99.999 percent sugar, with dashes of flavoring and food coloring.” Good for the teeth! Whether Morrison was enjoying the irony of his connection to the sweet stuff, or simply trying to disguise what he was selling, isn’t known; but the dentist named his puffy confection “fairy floss”! We get it, though: floss with these sugary strands and the tooth fairy will frequently visit your pillow.

Today, cotton candy is still called fairy floss in Australia and South Africa. In the UK, Ireland, New Zealand and India, it’s called candy floss. In Canada, as well as here in the U.S., we use the more descriptive COTTON candy. But a rose by any other name is … well, still just a form of spun sugar.

Cotton candy is mostly made of air. A typical serving size weighs about an ounce (30 grams). The confection is created by heating, and thus liquifying sugar; and then rapidly spinning a cylinder containing the liquid sugar, forcing the syrup out through tiny holes. The extruded sugar then re-solidifies in wispy strands of “sugar glass.”

Prior to Morrison’s 1897 invention of the electric “fairy floss” machine, making spun sugar was an expensive and labor-intensive endeavor. Hence, spun sugar was not widely available. Nor was it affordable to the average person. Today, cotton candy is a traditional and relatively inexpensive treat sold at carnivals, circuses, and fairs — with the airy confection either wound about a paper cone or stuffed into a plastic bag.

Morrison introduced his machine at the 1904 St. Louis World’s Fair, and his fairy floss was an instant hit. The dentist sold over 68,000 boxes at 25¢ per box, which today is equivalent to $6 per box. We mentioned earlier the importance of diversification. Morrison was also a lawyer, an author, and a civic leader. Oh yeah, and later he became the President of the Tennessee State Dental Association.

Several years later, in 1921, Joseph Lascaux, yet another dentist, from New Orleans, Louisiana, invented a similar fairy floss machine. This “tooth doctor” gets the credit for coming up with the more straight-forward name “cotton candy,” which he quickly patented. What was it with dentists and sugar? Just part of our wonderfully whacky world, we guess. And the ultimate statement in diversification.

Now go thou and diversify — and remember: “Whatever you do, do it enthusiastically, as something done for the Lord and not for men….” (Colossians 3:23 HCSB)