Ever noticed how often people use eggs to illustrate a point? For instance, “he’s a good egg — but she’s a rotten egg.” And how about, “the yolks on you”? Or, “you can’t unscramble eggs”? We hope you can relate, because if you can’t, then as writers, we’ll end up with egg all over our faces. Yes, eggs seem to have much to teach us, which makes them true “angels” (messengers) in the kitchen.

One thing we recently learned about this dynamic dietary darling with the “Humpty-Dumpty” body, came to us while watching a cooking show on TV. The show’s chef explained that there’s a “right” way to crack an egg. Oh really?!? And all this time we’d been thinking you just smack the sucker against the edge of a bowl.

Nope. The right way to crack an egg is on a flat surface, such as the kitchen counter. If you crack the egg on the rim of a bowl, the chef explained, pieces of the shell are pushed into the egg white. These shell fragments usually end up in the mixing bowl, and have to be picked out by hand — if you spot them. So if you don’t want tiny, gritty chips of calcium in your cakes or soufflés, then gently crack the eggs against a flat surface. 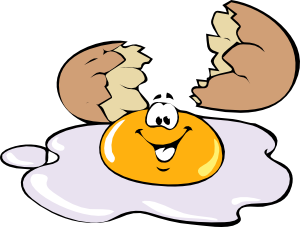 Now that’s kitchen wisdom! But the egg has far more to teach us. Call it “egg wisdom.” In fact, if you “egg” us on, we’ll share a nugget … or two … or three! Actually, we’ll share it even if you don’t egg us on!

Ready? “Don’t put all your eggs into one basket.”

We all know what this old saying means, but how many of us know where it came from? Seriously, why eggs? Why not “don’t put all your milk in one jug”? Or something else like that? Well, we’ll tell you.

We were losing sleep over this one, so we just had to know! After researching the oft-used idiom, we learned that it first appeared in the great Spanish novel Don Quixote. But not really. Confused? In Miguel de Cervantes’ novel, originally published in two parts (in 1605 and 1615), Sancho Panza proclaims, “It is the part of a wise man to keep himself today for tomorrow, and not venture all his eggs in one basket.” Faithful Sancho is sharing wisdom about the decisions we make today, and about our plans for the future. But did Cervantes really coin the famous phrase? Not quite. At the time, there was no such idiom in the Spanish language.

Cervantes did write something that expressed the same meaning; but the phrase “don’t put all your eggs in one basket”  is actually the handiwork of a British book editor, who got a bit too creative while preparing a later, English translation edition of the novel. This liberal-minded editor may have picked up the idiom from an Italian source, because in 1662, the popular book Italian Proverbial Phrases listed the following entry:

To put all ones Eggs in a Paniard, viz. to hazard all in one bottom. A Paniard is similar to a saddlebag, but the word is derived from the Latin panarium (or bread basket). To “hazard” all your eggs “in one bottom” is to place all your hopes and dreams, all your ideas and interests, all your money and resources, all your plans — all your whatever — in a single area or activity. Then, if the bottom should fall out (literally), all your “eggs” will drop to the ground, crack open, and be ruined. On the other hand, putting your eggs into several different baskets insures some will remain intact. After all, what are the odds of two or more baskets all having bad bottoms?

Applying to a college or for a job? Egg wisdom advises you send out multiple applications and/or résumés. If you receive a “no” regarding one, then simply move on to the next opportunity. Pursuing a dream? Explore several avenues. If you hit a brick wall, then simply try another way. Never give up. One rejection, one dead end, one nasty naysayer, one bottomless “basket” is NOT the end.

This sound bit of advice we’ve called egg wisdom is actually scriptural in origin. The Biblical King Solomon wrote, “Send your resources out over the seas; eventually you will reap a return. Divide your merchandise into seven or eight shares, since you don’t know what disasters may come on the earth.” (Ecclesiastes 11:1-2, Complete Jewish Bible) Notice the use of the plural: seas — not sea! And Solomon admonishes us to split up our resources into multiple lots.

When he wrote this passage, the wisest of Israel’s kings was giving advice in regard to both giving and investing, because — thanks to the divine law of reciprocity — the two actions are indeed linked. When we give (of our time, talents, and resources) and with the proper motives (always out of love), we are investing in the lives of others. Furthermore, Luke states “Give, and you will receive.

A large quantity, pressed together, shaken down, and running over will be put into your pocket….” (Luke 6:38 GOD’S WORD)

All this aside, we wanted you to know that when Solomon advised his people to “divide” their resources, he was essentially saying, “Don’t put all your eggs into one basket.” He just needed a British book editor who’d been reading Latin proverbs!

So, mystery solved: our first example of egg wisdom comes from the source of all wisdom, the timeless Word of God!