Monday we began a discussion on the similarities between cookbooks and The Bible. Books on the “art” of Cookery, as they were once called, were intended as instruction manuals for the kitchen; The Bible is our instruction manual for life, love, and relationships. Cookbooks contain recipes for preparing meals; The Bible contains “recipes” for peace, joy, hope, security and fulfillment.

Cookbooks and Bibles have something else in common. There’s this great mystique surrounding The Bible. There are people who’ve never lifted the cover of one, never turned a single page. Many of these people have no idea what “lurks” inside, and may even imagine the contents, if read, might somehow take control of their lives — turning them into mindless puppets. Either they’ve been listening to the wrong people or they’ve been watching way too much science fiction.

To get a reaction from The Bible, just take a copy to class one day, and watch the storm clouds gather over your local school. Place a copy on your desk at work, and you’ll witness a wide spectrum of emotions among your coworkers: from smiles to indignation, from people approaching you for advice, to giving you the cold shoulder.

Cookbooks seem to enjoy their own special mystique. Cooks often collect them and take great pride in proudly displaying them. Even people who never cook usually have one or two. They may even leave them out on the kitchen counter — which is sort of like saying, “I don’t cook, but I could, if I wanted to.” Some homes treat The Bible the same way: they keep this huge ornately-bound edition on the coffee table in their living rooms, and someone in the house may even be writing the names and achievements of their family members inside the cover. But they seldom read a word of its printed text.

Of course, who can blame them? Only the Incredible Hulk would be comfortable balancing these monster volumes, let alone reading one in bed. Cookbooks, too, are occasionally printed in “hulked out” editions. We personally own a couple that don’t fit on even our largest bookshelves — we have to lay these behemoths flat, and stack other books on top of them! (Warning: if you’re actually using one of these “cinderblocks” while cooking, be sure your hands are free of any oil or butter residues; if you accidentally drop one of these cookbooks on your toes, it won’t be the onions making you cry!)

And everybody seems to want to write a cookbook. It doesn’t matter if you’re already a famous talk show host, an award-winning performer, an accomplished athlete, or even British Royalty. Apparently you haven’t really arrived until you’ve written a cookbook. The countless celebrities who’ve published cookbooks include: singers Olivia Newton-John, Frank Sinatra, and Isaac Hayes (“Can you dig it?”); George Foreman; the Chicago Cubs; poet Maya Angelou; actors Gwyneth Paltrow, Stanley Tucci, Sophia Loren, Paul Newman, and Morgan Freeman (“Didn’t you get the memo?”); comedian Jeff Foxworthy; weatherman Al Roker; talk show hosts Regis and Kathie Lee; Jerry Seinfeld’s wife, Jessica (We’re not sure, but her book might be about nothing); Sarah Ferguson, the Duchess of York; and even Miss Piggy. (Sorry, no tasty pork recipes.)

But you don’t need to be a celebrity to publish a cookbook. Thousands of self-published cookbooks are distributed yearly, by Church congregations, civic groups, historical societies, law enforcement agencies, fire departments, schools, and even individual families. Chef’s put out cookbooks. National fast food chains and many regional restaurants have their names on cookbooks. Well-known brands such as Betty Crocker and Hershey’s publish cookbooks. There are even cookbooks tied to specific products such as Kraft Cream Cheese and Heinz Ketchup. (Seriously?) TV shows even have cookbooks! The Sopranos, Gilligan’s Island, and The Andy Griffith Show, to name a few.

Soooo many people have written soooo many cookbooks. Not even Carl Sagan could’ve comprehended the numbers: “Billions and billions….” These “kitchen bibles” are collected and proudly displayed; given as gifts and sold at garage sales. Ironically, a small percentage of these books are actually read. Even fewer are actually used. So, of what benefit are they? You can’t learn to cook by telepathy. Unless you open the book and read it, unless you use the recipes inside, it becomes nothing more than a knick-knack.

And the same can be said of The Bible. Many of us proudly display it in our homes, we carry a copy under our arms to Church and prayer meetings, we’re comforted to see it on the nightstand in our hotel rooms, or in the waiting rooms of our doctors’ offices. But how many of us actually refer to its many wonderful “recipes” for peace, happiness, and security? How many of us use it as our moral compass? Remember, no “cookbook” — 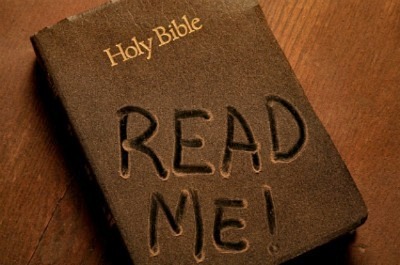 “Study this Book of Instruction continually. Meditate on it day and night so you will be sure to obey everything written in it. Only then will you prosper and succeed in all you do.” (Joshua 1:8 NLT)