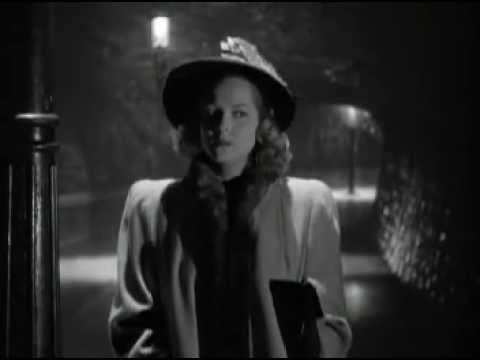 There’s a neat little directorial trick first used in Cat People, a 1942 horror film produced by Val Lewton and directed by Jacques Tourneur. Despite its weird title, the movie is actually an intelligent and well done psychological study of … oh dear, we’re starting to veer off on a tangent.

Anyway, in Cat People, there’s a suspenseful nighttime sequence in which the movie heroine believes she’s being stalked by something on a lonely New York sidewalk. Just as the tension builds to the point viewers think they can’t handle anymore, something rushes into the scene with a loud hiss!  After we toss our popcorn into the air, we realize it’s just a city bus stopping to pick up passengers. This directorial technique came to be known as a “bus” — we hope you can guess why — and it’s repeatedly used in movies to make us jump out of our skin. Anything that startles the viewer will work. Sometimes it’s the unexpected ring of a telephone piercing the silence, or the wail of a steam locomotive breaking the suspense! 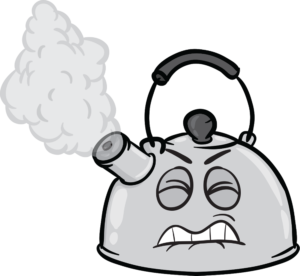 Ever put the kettle on to boil and momentarily forget about it. We have. Once, while waiting to enjoy a cup of tea, we started washing and drying dishes … and chatting; and yup, we forgot all about it. Meanwhile, the water in the kettle was getting hotter and hotter. Pressure built up in the vessel, and when it vented its steam it suddenly shrieked at us! Not expecting a “bus” in the kitchen, we almost dropped a couple of plates! We weren’t expecting the peace of our kitchen to be interrupted by a screaming kettle! And that’s the way we all feel when someone we know — possibly even care about — suddenly decides to vent in our direction. If the person is generally a peaceable soul, the sudden outburst can be totally unexpected and it can hurt!  If you’ve been the target of someone venting, a friend, coworker, loved one, and you suffered a steam burn, you’ll want to return for Tuesday’s Angel in the Kitchen post, and learn the best way to handle these situations. But today, we’ll discuss how to avoid spouting off at others in the first place.

We understand that sometimes the pressures of life build up in our tiny brains and overtaxed nervous systems, just like water coming to boil in a kettle. And if we’ve been holding it in, when we finally do vent, through some small outlet — perhaps a friend’s normally sympathetic ear — our angst and anxiety erupts like a volcano! Angry words, negative comments, and loud tones spew out like scalding steam.

Physics lesson: why doesn’t a saucepan scream at us when it lets off steam? Simple, it has a much larger opening through which to vent, so it’s constantly allowing the heat to rise. And hence, there’s no internal pressure building up. So pots are peaceful? They can be, but for more on that, please join us next week!

As people, we usually have one or two confidants to whom we vent. But, sometimes we bottle things up inside, refusing to talk about things that are bothering us, refusing to deal with issues that continue to build tension. Maybe there’s a relationship that could benefit from more communication, a situation at work or church that needs to be addressed. Just talk. Don’t wait till things are so bad that you blow up. Many times the person who hears us “shriek” isn’t even the one who needs to hear what we have to say.

Are you a little hotheaded? You need to cool that down. There’s an old expression concerning steam locomotives: “Build a head of steam”; this is good for trains because it helps them to move forward, but bad for people because it holds us back in just about every human endeavor. So how do we let off more steam more easily and more productively? Glad you asked!

Like the saucepan, we need a larger opening, a larger direction to vent in. That would be God. Hey, He loves it when you vent. He longs to hear every little detail of every little problem you’re facing. And letting off steam in His direction is much safer and far more productive. First, He always has the answers (which we find by reading His Word daily), and second, once you get it off your chest, you’ll be much calmer when you get around the rest of us.

Advice: Daily vent with the Lord, cool your head and calm your nerves with God’s written promises, have the quiet time you need each and every day to avoid letting the cares of life build up inside you. You’ll be doing less spouting off, less screaming — and less apologizing. Because, yeah, when you do unexpectedly and accidentally vent, you need to be just as quick to say

you’re sorry. We’ve all been there, we all understand about letting off steam, but we need to hear you say it. Okay? Now, how about that cup of tea?

“Let all that I am wait quietly before God, for my hope is in him. He alone is my rock and my salvation, my fortress where I will not be shaken. My victory and honor come from God alone. He is my refuge, a rock where no enemy can reach me. O my people, trust in him at all times. Pour out your heart to him, for God is our refuge.”  (Psalm 62:5-8 NLT)