Recently, one of us got a drink from the tap. Little did we know that just minutes before, one of us had been doing the dishes — with the hot water running. But now the water in the line was no longer hot. Now it had cooled a bit, so it was only lukewarm. One sip was all it took to realize IT WAS DISGUSTING! A cool glass of water is so refreshing, and hot water is truly useful for so many wonderful things — but it was hard to resist spitting out this “in between” drink!

We started thinking about other beverages that are great either HOT or COLD — but rarely in between. Hot cocoa is delicious when piping hot. And if you refrigerate what’s left over, it makes a frosty chocolate drink. 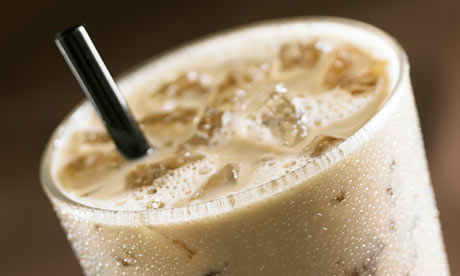 We all know nothing beats a cold glass of lemonade on a scorching summer day; and although we’ve never tried it, we’ve heard of people drinking hot lemonade to remedy colds and sore throats.

We suppose there are those who’ll drink tepid tea or coffee, but most of us can’t stand either of these mainstays when they’re lukewarm. Coffee or tea that’s sat around is gross! On the other hand, both coffee and tea at either end of the “temperature taste” scale are enticing and invigorating. Both are hot libations that comfort us and help us face the day. Iced tea is a mealtime favorite and iced coffee is a guilty pleasure. But in between, neither of these drinks are very palatable.

There’s a silly but cute old made-for-TV movie called Coffee, Tea or Me?, which starred Karen Valentine as a daffy airline stewardess looking for a husband. The 1973 movie was loosely based on the novel of the same name, a highly-fictionalized account of the “swinging” life of stewardesses, which managed to unfairly stereotype women in this demanding job — and which led to the mainstream adoption of the expression “coffee, tea or me?”

We mention this because the phrase is perfect for the point we wish to make. Some things, like coffee and tea, are great if they are either HOT or COLD. Otherwise they’re a bit repulsive. In God’s eyes — and here’s where the “me” part comes in — people are the same way! Our Heavenly Father delights in us when we’re on fire (extremely passionate) for Him. This doesn’t mean we go around acting like dorks who can’t talk about anything but God. But it does mean our focus is on Him and doing His will, and on being pleasing in His sight. It means loving God, and if we love God, then we demonstrate it by doing our utmost to obey Him, and to love others. We’ll come up short time and again, but we’re constantly trying to rise higher.

If we’re cold, God looks down upon us and sees great potential. He loves the non-believer, but He doesn’t expect anything from him or her; because God understands that the non-believer doesn’t yet know the basics. The believer doesn’t get off quite so easily. God expects more because we know more and have more. When we accept Christ as our redeemer, we become a member of God’s family — and He hopes we’ll behave ourselves and not act like a bunch of black sheep.

God can work with people who are HOT (on fire for God) or COLD (non-believing with awesome potential), but He doesn’t have much use for those of us who are in-between. He actually finds a “lukewarm” believer distasteful: “…Because you are lukewarm–neither hot nor cold–I am about to spit you out of my mouth.” (Revelation 3:16 NIV) Scary, right? Like a drink of tepid tea or room temperature coffee, a half-hearted, unenthusiastic, apathetic, indecisive, wishy-washy believer is NOT palatable to our Lord.

Are you hot, cold or lukewarm to God? If your answer is lukewarm, then ask yourself, “What happened to cause me to grow lukewarm?” Have you allowed hurts and disappointments to cool your passion for God? Have you simply grown weary in well-doing? Or have you lost your first love?

You may be attending church religiously; you may be active in ministry. These things are important, but what God really wants from you is a RELATIONSHIP, not RELIGION. He wants you to love Him, trust in Him, and abide in Him — to do the right thing to please Him, not to fulfill a formula or follow a ritual or be seen by somebody.

If you’ve allowed your relationship with our Heavenly Father to get tepid, ask Him to relight the fire that was once in you. Return to your first love, and the enthusiasm you once had. Stop sitting on the fence. You can once again be hot-stuff for the Lord. “Coffee, tea or ME!”