He ranks alongside Edgar Allan Poe as one of America’s all-time greatest fantasists. And although he was never prolific — and was only sparsely published during his lifetime — his short fiction is enjoyed and collected today by countless readers. His body of work has also been a source of inspiration to hundreds of writers who followed in the footsteps of this, at one time, rather obscure scribe.

Today, the work of H. P. Lovecraft is well regarded and continuously reprinted. But during the writer’s lifetime, he often struggled to get published. Although Lovecraft placed several stories with the seminal American fantasy magazine, Weird Tales, his stories were criticized by readers not accustomed to the writer’s less than orthodox approach to fiction. Lovecraft produced such classics as “The Shadow Out of Time” (1936), “The Dunwich Horror” (1929) and “The Call of Cthulhu,” the 1926 horror tale that launched The Cthulhu Mythos, a cycle of stories by Lovecraft and other writers with whom he corresponded.

By inviting and encouraging other writers to play in his literary sandbox, Lovecraft created what is perhaps the first shared fictional universe — and modern writers continue to sift through the Mythos, after nearly a century, for inspiration and story ideas. And although many people have never even heard of Lovecraft, or the word Cthulhu, they have nonetheless been exposed to his ideas and influence through movies, television, books, and comics.

Lovecraft was well-read in a variety of subjects. He was also gifted with an intense curiosity and a vivid imagination — traits every creator (whether they are writers, artists, performers, inventors, or entrepreneurs) should try to cultivate and feed. But the lesson of Lovecraft has other tricks to teach us about creating lasting works and achieving our dreams.

Lovecraft frequently corresponded with his peers. In fact, his letters have filled several books. Today we’d probably call this networking, but it enabled Lovecraft to participate in an exchange of ideas that stimulated and enriched his work. Staying in touch with his readers and other professionals also fostered a support group that provided feedback and encouragement.

Lovecraft also shared his intellectual properties and abilities. In addition to encouraging other writers to create Cthulhu Mythos stories, he sometimes edited and polished the fiction of other writers, enabling them to publish. He even ghosted for the great magician and escape artist Harry Houdini. Clearly, Lovecraft was more interested in furthering the weird

tale than in furthering his fame. He was a true facilitator, what we’ve often referred to as a “Barnabas.” (In Acts 9:26-31, Barnabas is the quintessential friend and facilitator: he stood by the Apostle Paul, who was viewed as an unknown quantity; and then he greatly aided Paul in his mission to take the Gospel to the Gentiles.)

Lovecraft wrote it down. The author was careful to record all his thoughts, feelings, and story ideas. In fact, Lovecraft kept a journal (his “commonplace book”) filled with his dreams and observations and descriptions of people, places, and things — as well as fragments of plots for future stories. Writing down his ideas helped Lovecraft to refine, shape and solidify his creativity. And it ensured the writer never lost his precious “diamonds in the rough.”

Which brings us to an important spiritual truth. Words have power, to encourage, to create, or to destroy. In fact, the spoken word holds “the power of life and death.” (Proverbs 18:21) However, the written word has even more influence! That’s why, for instance, legal contracts are rarely based on verbal agreements; words on paper carry far greater weight, and are far more binding. 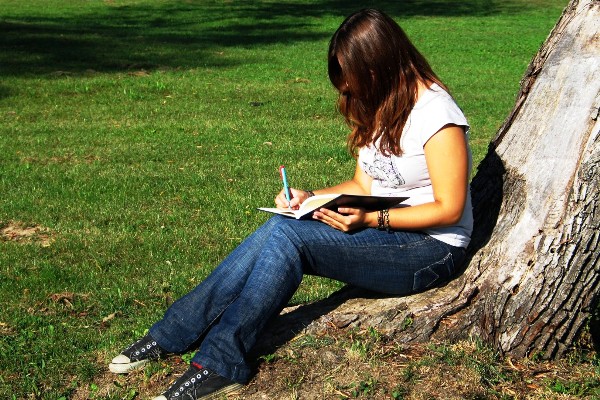 Furthermore, when it comes to formulating and solidifying your dreams and goals, writing the vision is extremely important. Ideas and inventions, the seeds of great plots and plans, begin to take shape and grow when properly recorded. “The more you write about it and talk about it,” writers Jack Canfield and Mark Victor Hansen state, “the more clear and believable it will become.” (Chicken Soup for the Soul: Living Your Dreams, p. 9)

The creators of the Chicken Soup for the Soul books go on to explain, “Just writing them down [your hopes, dream, goals, and visions] will set into motion an amazing process of bringing these things into your life.” (p. 10)

Sounds mystical, right? But think about it: writing down information and ideas aids our learning process (the mental acquisition of these ideas) — which is why teachers encourage students to take written notes; writing down information and ideas helps us to focus and refine it — which is why it’s always better to write down those instructions from your boss or teacher; and then too, seeing things in written form gives actual shape and substance to our ideas — and reality to the abstract thoughts formerly locked away within our brains.

We keep “dream notebooks” in which we’ve plainly written the vision God gave us in 2001, as well as the steps we’ve taken toward fulfilling that vision. We also jot down our ideas, our plans, and the things we need to do

or accomplish in order to further our goals. We copy Bible scriptures that “speak” to us about our dreams; and we collect inspirational stories and quotes which encourage and support us in the pursuit of these dreams.

Do yourself a favor: WRITE IT DOWN! Put your dreams, goals, plans and ideas on paper. Doing so will help you stay focused, encouraged, and motivated! Then review these notes. You’ll find your own scribblings can be a reminder of where you’re headed and how far you’ve already come, a great source of inspiration and reassurance.

Here’s a quote for your very own commonplace book: “Write the vision; make it plain on tablets, so he may run who reads it. For still the vision awaits its appointed time; it hastens to the end—it will not lie. If it seems slow, wait for it; it will surely come….” (Habakkuk 2:2-3 ESV)

We’ve all heard it: “If you fail to plan, you plan to fail.” Say what ?! Nobody in his right mind plans to fail. Not intentionally, anyway. But many of us do fail to plan. We fail to set goals, map out what we want to accomplish in life, and strategize how we’ll go about doing it.

We’ve previously stated that if you don’t shoot for something in life, then you’re not living life to its fullest. Or to put it another way, if you don’t aim for something, then you’ll be … well, aimless! — just shuffling along with no purpose and no hope. Soon you’ll start to shrivel spiritually.

The  writer of Proverbs 29:18 teaches us that “Where there is no vision, the people perish”; so don’t keep living aimlessly. Take aim.

Now, are you ready to fire away? Once you do take aim, everything else boils down to strategy, your plan of attack. Think of a war. Great wars are won with smaller victories won in battles. Your goals will be achieved in much the same way, through the small victories and accomplishments that move you closer to winning your bigger dreams.

And indeed, achieving a truly big dream is much like waging a war, to overcome the obstacles imposed by time, resources, circumstances, and even people who don’t want to see you succeed (for various reasons). Are you strategizing to win the small battles you encounter each day?

Every morning you should map out your day. Make a list of things you need to do and want to accomplish. Prioritize your “to do list.” Work to achieve something worthwhile every day. Little steps carefully planned each day can take you far along the path to success.

Novels are written a chapter at a time, chapters a few paragraphs at a time. And even four or five sentences a day can soon lead to an entire book. The key is: have a plan or a list or a strategy EVERY day to accomplish SOMETHING. Take aim in life for the long haul, but also take aim daily. Doing so will remind you of what most needs your attention, help you to stay focused and use your time wisely; and keep you moving forward and on the right track.

Today’s quote for those who dream great things:

Protect your enthusiasm from the negativity and fear of others. Never decide to do nothing because you can only do a little. Do what you can. You would be surprised at what ‘little’ acts have done for our world.  —Steve Maraboli, Unapologetically You: Reflections on Life and the Human Experience