New York book publishers in the early 1960s thought the idea stank — like old fish and seaweed — and that as a writer, Ricou Browning was wet behind the ears. And he actually was, both figuratively and literally. Browning was an underwater cinematographer and stuntman in his early thirties, who had no previous writing experience. But in a splash of sheer inspiration, Browning got a great idea for a novel. At least, he thought it was great. Book editors at practically every publishing company, however, thought he was “all wet.”

Hollywood had a history of making bankable stars out of excellent swimmers. In the early 1930s, two Olympic Gold-medalists dived into film roles that made them box office attractions. Buster Crabbe surfaced in cliffhanger movie serials, playing the seminal space heroes Flash Gordon and Buck Rogers. Johnny Weissmuller swung into action as Tarzan of the Apes, making 12 crowd-pleasing motion pictures before his expanding waistline forced him to hang up his loin cloth. (Not to worry, though, because savvy film producers simply clothed Weissmuller in a safari outfit, and started making a slew of Jungle Jim movies.)

And throughout the 1940s and 50s, champion swimmer Esther Williams starred in flood of “aquamusicals,” which featured elaborate sequences of diving and synchronized swimming.

Following in the wake of these three great swimmers-turned-actors, Ricou Browning landed his own starring role … well, sort of … portraying the title character in Universal Studio’s classic horror movie The Creature from the Black Lagoon. Hey, it was good money, and the film spawned two sequels which kept Browning swimming in the dough — as well as the large fish tank used to film all the creepy underwater sequences. Unfortunately for Browning, no one could recognize him under the green latex gills and fins.

By 1960, Browning was directing and/or filming the underwater sequences for television shows such as Sea Hunt (with Lloyd Bridges) and The Aquanauts. But the young man had even greater creative aspirations. One day, while watching an episode of the ever-popular series Lassie with his 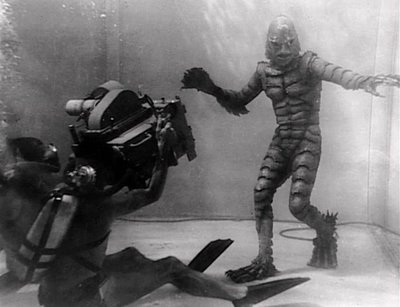 kids, Browning started sloshing around a highly original concept in his waterlogged brain, for an adventure tale about an “aquatic Lassie.” He took his ideas to a good friend, and together the two men wrote a novel … which nobody wanted to publish. Period.

That might have been the end of the story, had Browning not bumped into his old boss, movie and television producer Ivan Tors. Browning had worked with Tors on Sea Hunt, and figured he’d found a fellow with whom he could drown his sorrows; but after Browning explained his “novel idea” to Tors, the Hollywood producer immediately suggested they turn the unpublished book into a movie.

Tors was an innovator, as evidenced by such successful television series as Science Fiction Theatre, in 1955, and a 1961 show called Ripcord, which ultimately popularized skydiving as an extreme leisure sport. Then, too, Tors was a huge animal-lover. He’d eventually create and produce two long-running TV shows, one about a vet in Africa, Daktari, and one about a boy and his bear, Gentle Ben. So the producer was eager to sink some time and money into the heartwarming story of … a boy and his dolphin.

Flipper, the novel nobody wanted to publish, soon became Flipper, the motion picture. The movie was a box-office hit, and earned a sequel less than a year later, quickly followed (in 1964) by a television show that lasted 3 seasons and 88 episodes. In fact, Tors ended the show while it was still a ratings hit, only because he wanted to pursue other projects. But not before Flipper (played by a bottlenose dolphin named Mitzi) helped its creators to soak up lots of cash, through licensing deals that included lunch boxes, coloring books, toys, and games.

Got a novel idea? Have faith and stick with it.

Has someone tried to convince you, regarding your dreams, that you’re all wet? If their resistance to your work smells a little fishy, well, perhaps it is. Think of all the people who initially faced rejection, only to make a big splash later, in writing, illustrating, singing, acting, inventing, innovating and, in general, creating. So keep on treading the often turbulent waters of life and success. Swim with the “dolphins,” gentle and intelligent; and look out for the sharks.