The cool thing about creators is that we find them in a variety of occupations. Creators aren’t just writers, artists, actors and filmmakers. Chefs create and cook new culinary masterpieces. Crafters design and assemble unique works of art. Inventors and entrepreneurs create new devices, processes and services, and then find new ways of marketing these. In fact, there are as many types and examples of inspired creativity as there are facets on a diamond — or flavors in a pack of Life Savers.

Clarence Crane created the first Life Savers candy in 1912. Not much is known about the Cleveland, Ohio, candy maker, except that he was the father of yet another creator, the famed American Poet Hart Crane. We do know, however, that Clarence Crane invented Life Savers as a “summer candy” that would resist melting. His circular mints were molded to resemble the flotation devices used at beach resorts. Crane didn’t own machinery needed to mold his “Pep-O-Mint Life Savers,” so he contracted a pill manufacturer to press the mints into shape.

In 1913, Crane transferred his “diamond” to Edward Noble, a New Yorker who would further “polish the gem.” Noble bought Crane’s Life Savers formula for $2,900. Noble started a company that had the capability to mix and mold the candies. He also devised a better way to package Life Savers to prevent the candies from going stale. His company hand-wrapped rolls of Life Savers in foil and then affixed paper labels. The process proved to be labor intensive, but in 1919 Noble’s brother Robert, an engineer, developed machinery that completely automated the wrapping process.

A year later, Robert Noble continued to be a creative force in the company. He expanded on his younger brother’s entrepreneurial vision by first introducing newspaper ads and then expanding the company by building larger, more streamlined manufacturing facilities. He also began introducing a spectrum of colorful new flavors.

In 1921 the Nobles created fruit-flavored Life Savers, which were translucent, almost crystalline in appearance. In 1925, the company further improved its manufacturing process and devised a method of actually putting a hole in the center of the candies. The original chalk-white mints were simply molded to resemble lifesaver flotation rings. The new Life Savers were introduced as the “fruit drop with the hole”! 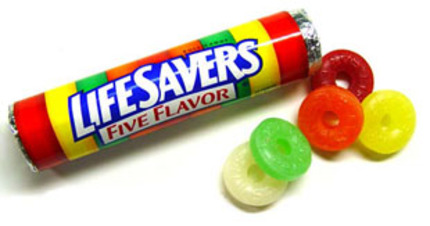 The Nobles continued to promote their candy by creating special box displays that allowed LifeSavers to be positioned next to the cash registers in cigar stores, drug stores, barber shops, and restaurants. They held the price at 5 cents  for years, encouraging shoppers to trade that nickel in their change for a roll of Life Savers. To say the candies were popular is an understatement: during the Second World War, the little Life Savers were a heat-resistant favorite candy among the Armed Forces, and a sweet reminder of life at home. And to make sure there were enough Life Savers to go around, competing candy companies willingly donated their own sugar rations to meet the production demands of the Nobles’ company! That’s teamwork!

Great ideas and savvy innovation are simply facets of the “creative diamond”! One creator may unearth a “gem”; another cuts it; another polishes it. You can be creative, either by inventing, creating, innovating or facilitating. “It’s not important who does the planting, or who does the watering. What’s important is that God makes the seed grow. The one who plants and the one who waters work together with the same purpose. And both will be rewarded for their own hard work.” (1 Corinthians 3:7-8 NLT)